When I moved from the life I had been living, I stepped into the void. I was finally able to ask those questions that I had never been able to voice before. Who am I? What am I here to do? Questions can be dangerous – they require tremendous courage to ask because new questions lead to new ways to perceiving. All new and original thought begins with a focused question, which leads to an exploration. I was passionate to explore and driven to do whatever it took to find the answers.

Once I started asking the questions, the answers began to show up in unexpected ways. As I moved deeper into transition, I ended up visiting my friend Pamela, in Sedona, Arizona. I had no money for an airline ticket, but I had airline miles that were about to expire. This coincidence was the start of an exploration using the magic of conscious intention. 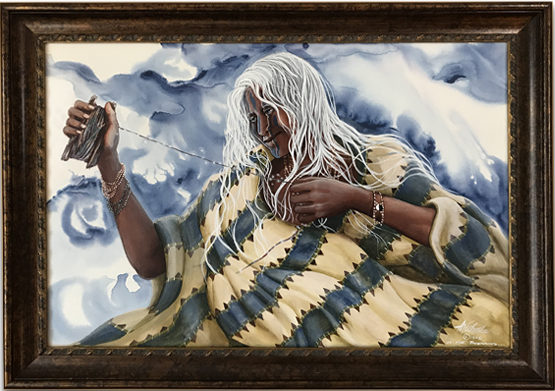 When I arrived at Pamela’s home, there was a large painting sitting in the bedroom I was to stay in. I was immediately drawn to the wisdom I saw in the face of the native woman in the painting. This original oil painting depicted an old native woman spinning threads with shining dots of light embedded in and around the threads. I had an inner knowing that each dot of light was a person or experience. Pamela explained that the old woman was the “webweaver” of the tribe because she weaved and connected people and experiences together. She was an important and honored master in the tribe. Pamela insisted that I take the painting.

“Why?” I asked. She smiled and said, “Because you are the “Webweaver,” weaving people and experiences together.” Could this really be a clue to who I was? I began to understand that Pamela was showing me a symbol of who I was.

At first when I looked at the picture, I believed it represented me, but I couldn’t identify with it. I pondered and allowed this new symbol of my identity to integrate into my life. I started to create a new story about me, about my gifts, and about my destiny. I began to own my gifts and to understand them in a new way. I hung that symbol of me on the wall right behind my desk, and the energy of this image was so powerful that everyone who saw it asked if I would tell the story of the painting. The more I told the story, the more I became the Webweaver. I realized then that I had been connecting people together and weaving energy my whole life – that it was not new.

The new perception was seeing myself as a unique, powerful being with important work to do. As I believed and owned this first answer, I moved into becoming more of who I am. This was the first of many explorations that led me to wonderful places and incredible people. And the Adventure continues. . .